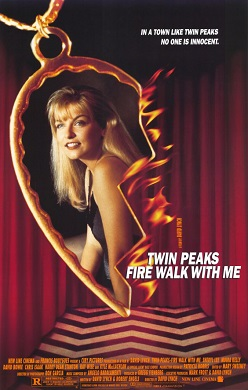 NOTE: This essay is part of a 2020 project in which I watched the entire Twin Peaks canon in chronological order (by production date) and wrote an episode-by-episode response. Most of these are collected on a private Twitter page but the longer film demanded a longer response…

The first time I watched Twin Peaks: Fire Walk With Me (FWWM), it was on a tiny square screen in the library of Westminster University’s Harrow Library. Then I hadn’t completed the TV series, and I remember trying, and failing, to make any sense of it. This time the film, watched alone in the garage on a summer’s morning, needs no special effort. Emerging into the light, I feel at once battered and bereft. Loss at the end of a personal viewing journey, perhaps? Or a sadness at the plight of Laura Palmer? The meals-on-wheels angel, abuse survivor, coke-addicted seductress, who couldn’t shake off fate.

FWWM is a film in dialogue with Twin Peaks, the TV series, but it’s a dialogue shouted across a chasm. Part of the gap is about aesthetics. Where the TV series is bright and gaudy, the feature has a naturalistic texture. Also gone are a number of key characters, and locations, and with them much of the melodrama, and lightness. Sheriff Truman and Lucy; Hawk and Andy; Ben and Audrey; Catherine and Pete; Josie and Hank are all absent, along with the mill, the police office, and – most missed – the Great Northern Hotel. Here, the focus is on the home – and a single character’s death in that most dangerous of arenas.

Not only are characters missing, or changed, the whole mood is darker. TP, the series, has nearly as many chuckles as frights. TP the move has two – precisely two – moments of humour: Laura fumbling over her stockings, and Albert’s questioning of the moral integrity of “half the girls in America”. In its stead are persistent themes of sex, drugs and child abuse.

But yet the film does engage in, and work with, Twin Peaks plot lines: the extended Theresa Banks prelude; Cole and Cooper’s creepy Philadelphia sequence; Bobby and Laura’s drug dealing, and drug taking; the coke-sex party in the lodge; Leland’s murderous final appearance; and the role of the one-armed man all need something else to explain their presence. Likewise the evil cabal – including this time Lynch’s magician son – and the final ‘White Lodge’ scene.

This is a film built from what feel like a series of symphonic movements, each with their own tone and mood. The first, a 32-minute sequence, is grubby and noir-ish. Despite some identical building blocks – rural murder, police investigation, FBI meddling, baffled local community – the passage is clearly an inversion of the TV series. Rather than a cheerful, upbeat Special Agent Cooper, we get a sneering, violent Chris Isaak; rather than all-American nice-guy Harry S. Truman we get a gangster for sheriff; rather than Norma’s Teflon-slick diner with its whiff of cherry-pie and Americana, we get a nicotine-stained restaurant worthy of Edward Hopper; rather than a suburbia built of palatial family homes and manicured lawns, there’s a nervous, poverty-stricken trailer park; and rather than being surrounded by magnificent Scots Pines, it’s propped up by electrified telegraph poles.

There are several memorable moments in the prelude: first, the surreal opening shot of screaming kids of a school bus in the middle of a prairie while several FBI agents handcuff what appear to be sex workers – an establishing shot designed to establish nothing but incongruity; second, the scarlet woman who makes a series of comical gestures whose meanings are later deconstructed with absolute seriousness by the FBI pair of Chris Isaak and Keifer Sutherland. It’s seems to be a sequence about the importance of reading signs (in Twin Peaks? In all of art?), but also the absurdity of doing so. Given this is all I have been doing for the last three weeks, this is tantamount to personal communication from David Lynch.

When we finally reach Twin Peaks – a quarter of the way through – the familiar opening twang of Badalamenti’s score is sounded but, again, we are thrown off balance by the fact that the first of the old characters (other than Laura) is Donna being played not by Lara Flynn Boyle but Moira Kelly. As with the opening shot of the smashed TV, Lynch wants to draw attention to the fact that this Twin Peaks is different – and nastier.

Abuse is referenced in the early Harold scene (“He’s been having me since I was 12”) and draws nearer in the chilling dinner table sequence where Laura, mouth agape, begins to connect her father with some deep malevolence. Somehow she’s ignored, or buried, the truth, but now she knows – she knows! – and it’s just too horrible to comprehend. The later bedroom/rape scene makes the theme manifest. Laura becomes aroused on her bed; Bob then crawls in from the window, perhaps bidden? Laura, scared, but somehow accepting, implores: “Who are you?” She should know, but Laura has apparently coped by refusing to name the evil that visits. When the identification is made – through the sudden face-switch revelation between Bob and Leland – it hits hard.

Two other, related, TP evils – drugs and whoring – were both referenced in the TV series but here become leitmotifs. They’re at their most explicit in the extraordinary Roadhouse sequence. After a dark warning from the log lady, Laura – later joined by Donna – wade into a swamp of drugs and desire, and lose themselves amid sensory overload. People speak but neither they, nor we, can hear their words against the throbbing music. We are in a language-free zone of movement, colour, sound, and sexual attraction. It’s seductive, yet patently abusive. And all the while it’s not entirely clear who is abusing who. The fact it goes on, and on, defies all convention. It demands to be seen large, and with a very loud sound system.

Religious symbolism, and iconography, provides another pivotal link between the film and TV series. Twin Peaks is a world where the binaries of good and evil are drawn and then pushed uncomfortably together like awkward dinner party guests. The ending, which sees Laura tied, bound, abused – then re-tied, re-bound, re-abused and ultimately slaughtered is surely as disturbing as Hollywood has ever dared. She is released from her torment into the White Lodge – visually indistinguishable from its ‘Black’ namesake – but where Cooper, unknown to her, places a consolatory hand on her shoulder as she gazes, through tears, at a fragile, hanging angel – perhaps the same that disappeared from Laura’s bedroom painting. The Black Lodge is the White Lodge; the child-abuser is the loving father. Twin Peaks demands we accept the coexistence – perhaps even the coalescence – of good and evil, terrifying as it may be. A monkey is seen, choral church music sounds: our simian instincts and our elevated spirit places side-by-side, with all roads leading back to sex. The desire and the loathing; the good and evil; the chance to make anew, the tendency to hurt and to harm in the process.

The ending baffled me completely the first time around, but now I think I understand. For a film which delves into the deepest reaches of dream, fear and human depravity, that final reaching for solace, and spiritual levity, is genuinely moving. The fact it’s a rather tenuous and tacky spirituality is, of course, what makes Twin Peaks Twin Peaks.