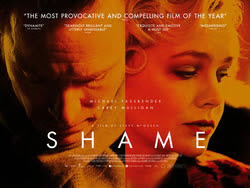 The second full-length feature by British director Steve McQueen is a curious vignette, trapping the viewer for 90 disorientating minutes inside the mind of a 30-something New York City executive. There is scant revelation, other than our subject is ostensibly successful – working at the oily end of corporate deal-making – and that he appears to direct every available energy toward the next pick-up, prostitute or pot-noodle dinner date with hardcore pornography. The external drama, as it is, revolves around the arrival of his troubled sister, Sissy, a jazz singer with scars the length of her arm, who needs a sofa and – as becomes increasingly clear – some sign of sibling affection. The connection she craves is harshly rebuffed but the intervention disrupts Brandon’s seemingly eternal wallowing in his sea of sexual indulgence and prompts an ill-fated attempt at a ‘real’ relationship.

The film’s narrow psychological focus contrasts with a sweeping, sorrowful piano score which underlines Brandon’s numbness as he drifts through gorgeous-but-empty apartments, offices and bars. Everywhere the possibility of connection is thwarted by that very glamour; the penthouse glass opens up the city but only reflects back an image of personal isolation. Distorted portraits are thrown back from steel-and-chrome surfaces. Manhattan makes for an ambiguous canvas, a irresistible playground of soaring penthouse heights and sordid, seductive depths – a landscape worthy of Dante. Several conversations between Brandon and his sister are shown entirely from the back of the head. The city tableaux, with all its indistinct pickings, is thrown out of focus and the characters’ self-obsession is suggested in the camera’s focus on faceless cranial spheres. The sole exception to a series of stunted communications is Sissy’s mournful rendition of New York, New York in a sky-high cocktail bar. This time, the camera lingers remorselessly on facial features. Eyes are cast downward and tears fall.

Shame dwells painfully on its primary themes: the damage wrought in the absence of love; the self-loathing of sexual extremity; the isolation of ‘success’ and luxury. Like McQueen’s follow-up, 12 Years A Slave, this is not an easy film or one that provides comforts or resolutions. The only glimpse of a back story for our sibling subjects is Sissy’s telephone plea to her brother: “We’re not bad people, we just come from a bad place”. Family is suggested as the source of the most profound turmoil but, perhaps also, the most profound redemption. It’s the hope for the revival of the central relationship that lends a tinge of hope, as does the symbolism of the film’s opening and closing scenes. Brandon begins on the NYC subway with an almost-psychopathic attempt to follow a woman off the train. The pursuit ends in failure and, after ascending to the ticket gate, he turns and trudges back underground.

By the denouement, Brandon inexplicably finds himself on the same train with the same woman. This time the two gazes are transformed: Brandon with a haunted gaze; the stranger oozing confidence. The film closes with a dilemma, beautifully etched on the face of actor Michael Fassbender. Will he attempt a chase? And will that chase be for lust or for redemption? Or is it already too late to escape the seemingly never-ending underground journey?