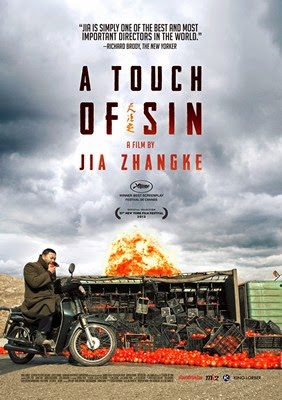 Described by Sight and Sound as “the most influential filmmaker within China today”, Jia Zhangke has built a mainstream career producing meditations on the social and psychological fallout of China’s post-1978 reform. His latest offering – A Touch of Sin – offers up a bleak appraisal of the state of the nation.

Structured around four tangentially linked stories, each drawn loosely from real-life and widely reported events, A Touch of Sin makes an epic perambulation around modern China, beginning in the snowy north, traversing the Yangtze, skulking amid the south’s sweatshops before heading to a barren no-man’s land – redolent of China’s dry-baked west – in a puzzling coda. Both place and plot blend into each other with a sense of meandering serendipity that recalls Richard Linklater’s Slacker. The camera, so intensely focused on one character or scene, alights as another moves into view. There’s a melancholy at the ease with which change takes place, even in the absence of immediate story resolution, though faces and images reoccur to maintain a sense of flow and, as becomes clear, circularity. The rhythmic elegance, built around Jia’s favoured dollies and slow pans, acts not only as a device which links the stories but also echoes the apparent indifference displayed by the characters. Lu Xun, the grandfather of literary modernism in China, introduced the notion of kanke wenhua to refer to the habit he observed of Chinese looking on to scenes of tragedy with a numb indifference. Jia’s lens draws the viewer, willing or not, into the same gaze and provides an appallingly unhurried perspective on the roll-call of sudden violence.

The indifference which pervades the film is belied in the first encounter. Dahai (Jiang Wu), a rotund iconoclast in the mould of art-activist Ai Weiwei, charges around his dusty village, hurling – perhaps reasonable – accusations of corruption at village elders. He is at once anti-hero and bully, fuelled by a righteous sense of injustice but destined, as a result, for self-destruction.

The second story transports the viewer to a Chongqing village, on the Yangtze, and re-imagines one of Jia’s favoured tropes, the migrant labourer in search of work. Zhou San (Wang Baoqiang) is a warped archetype: roaming the country, dutifully sending cash for his wife and young son and returning home out of filial obligation at Spring Festival. His itinerant life is, however, that of a gun for hire. He wanders through his village with the dead eyes of a gunslinger and departs as quickly as possible, but not before carrying out a murderous robbery, apparently for excitement more than economic necessity.

The third and fourth stories revolve around two of the most iconic news stories of recent years, the case of Deng Yujiao, a karaoke parlour worker – transposed here to sauna worker, Xiao Yu (Zhao Tao) – who murdered a local official after an attempted rape, and that of the spate of suicides at Foxconn’s goliath Guangdong plant. In both cases, details are altered, names are rearranged and back stories are imagined.

In all four scenes, gangsters and bullies populate, and pollute, the frame. Humiliation and casual cruelty is the shared language. The specific acts of violence have obvious Hollywood and exaggerated kung-fu stylings – Dahai’s rampage is pure Schwarzenegger, played for gore and for cheers as the apparently deserving targets meet their end; Zhou San is inscrutable Eastwood, lonely, clinical, borderline psychotic; Xiao Yu swishes her fruit knife like Zhang Ziyi in any number of martial art blockbusters. Even Xiao Hui (Luo Lanshan), the baby-faced innocent of the fourth story, falls to his death with a theatrical gesture, arms spread like a malfunctioning Bruce Wayne.

The treatment of violence suggests something of the magic realism peppered throughout Jia’s earlier work and rarely far from the screen here. Dahai’s anger is apparently precipitated by a huge but unexplained explosion just prior to the opening credits and reaches a climax when a wall-hanging of a tiger in his home apparently begins to snarl; a travelling impresario appeals to an audience of nobody to visit his snake show, housed within an apparent ambulance which later provides a refuge to Xiao Yu; two pieces of street opera point to parallels between folk lore and contemporary conundrums. In Jia’s world, the strange and inexplicable becomes merely humdrum.

Animals are a recurring motif in both visuals and dialogue. A horse is whipped remorselessly; the camera lingers on a goose bleeding from the throat; tethered cattle head to the slaughterhouse on the back of cramped flatbed lorry. Human and animal appear mutually doomed. Indeed, a TV show draws specific attention to the parallels between the species during Xiao Yu’s lonely nightshift in the sauna; animals can also commit suicide, she learns. It’s one of the few things which causes her to raise a smile.

The starkness of the violence diminishes during the journey south and the move from countryside to city. The wealthy southerners are more oleaginous than outright dangerous. However, in both language, gesture and basic indifference, the essential inhumanity persists. In each case, the perpetrators of violence go apparently unpunished while, with the exception of Xiao Yu’s attacker, the viewer is not exposed to the original crime which caused such an explosion of rage. All are implicated; nobody is innocent.

It is important that Jia foregrounds China’s modernity. This is not a backward glance at recent history, as in earlier work Platform, or a safe displacement of callousness to the countryside, as in Still Life. The mood of brooding menace and violence pervades both city and country, waterways, newly-built highways and bullet trains. There are inversions of the expected symbols of China’s progress. The case of Deng Yujiao is often seen as heralding the Internet’s transformative potential. With the world watching, no more could the tyrannical official get away with his crimes. However, in the final story the Internet is mocked as a tool of distraction.  Li, the young prostitute, may be initially excited to read the latest news on her iPad but the only comment she and Xiao Hui can think up to the litany of disaster is ‘WTF’, a semantic echo of Zhou San’s dead eyes and indifferent shrugs. This is a modernity in which the corrupt not only get away with their corruption by do so in luxurious privacy. With its Vegas-inspired decor, tuxedoed waiting staff and tech-obsessed prostitutes, the brothel of the final story must be the most glamorous ever seen on a Chinese screen.

The film offers little in the way of an escape plan out of the moral morass. Family, that bulwark of Chinese culture and custom, is presented as immovable but as likely to provoke problems rather than offer comfort. Dahai’s violence is stirred by her sister’s demand that he conform; Zhou San would rather flee to Myanmar than hang around his wife and son; the prompt for Xiao Hui’s suicide is his mother’s nagging, not the intolerable working conditions. In this context, Xiao Yu’s yearning for a child only adds to the tragedy of her situation.

Jia’s earlier work focused on the cruelty of raised expectations and dashed dreams. Here, hope is snuck early into all four stories – Dahai with his belief in the righteous power of the Central Commission for Discipline Inspection, Zhou San with his Myanmar escape fantasy, Xiao Yu with her dreams of the simple family life and wide-eyed Xiao Hui with his palpable desire for girls, gratuities and smartphones. In each case, that faith in a better tomorrow runs headlong into the harsh here and now. However, just when the viewer might remark that China has never looked so bleak, we are magically transported again, into that final, puzzling scene which is, paradoxically, a return to the beginning as well as a fresh start under a clear blue (Western?) sky. With its wonderful sense of flow, connection and circularity, A Touch of Sin suggests that while the here and now may be unremittingly bleak, movement never stops and things may yet turn again.